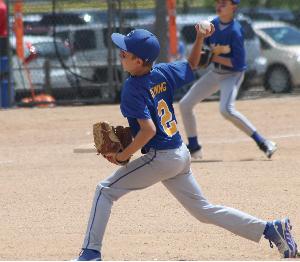 Cooper Deming - And his love of baseball

We are the largest team riding annually in the Courage Classic, a challenging 2-day bicycle tour, covering 160 miles over several mountain passes and a fundraiser benefiting Children's Hospital Colorado.

For thirty years Children’s Hospital Colorado has hosted the Courage Classic. This two-day bike ride in beautiful Copper Mountain attracts more than 2,000 riders each summer. Wheels of Justice is the cycling team devoted to raising funds and awareness for pediatric cancer. All proceeds raised by Wheels of Justice go straight to the Center for Cancer and Blood Disorders at Children’s Hospital Colorado.

The 2019, Wheels of Justice team broke all the rules, reaching new highs and setting multiplee records. We raised over $529,000 in just one year. This is truly remarkable, and has never been done before. Our team inspired almost 4,000 individual donors this year, and our all-star MVP player was Martha Riedel, raising $132,000. As a team of #PartnersAgainstCancer we have raised over $4.99Million (lifetime). Our goal for 2022 is…. $500,000!. We believe with your help, we can reach this dream destination.

As this past season came to a close, we looked back on how we got to where we are today. The patients and the families drive every aspect of our success. We COULD NOT come close to the difference we are making at Children’s Hospital Colorado if it weren’t for each family giving us a glimpse into their lives and their stories.

WOJ is more than just a team, we are a collection of families, dedicated beyond measure to curing cancer. We offer training rides, great apparel, kick-off parties, first year mentors and so much more!