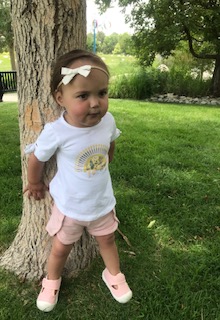 Everly: On behalf of Mom Melissa

Everly was born at the beginning of 2021 with Hypoplastic Left Heart Syndrome. With this diagnosis, three open heart surgeries are necessary in the first few years of life. At 4 days old, Everly had her first life sustaining open heart surgery. At 4 months she had her second and between the age of two and three she will need her third.

In many ways, Everly has done very well with her diagnosis and is on the higher end of the spectrum. She has always been a very special girl from the start. She's been smiling, "talking to the nurses/doctors", and winning hearts since before she was even one month old. Along the way, she's had to endure some complications directly and indirectly related to her diagnosis. In her first eight months of life she has been inpatient seven separate times for a total of over three months. After her first surgery, she had a double uterine hernia surgery and an endoscopic procedure to remove gallstones. She's also had two heart catheterizations, collateral vessels cauterized, a couple of effusions that took a while to heal, and simple colds and oxygen drops that have landed her in the hospital.

Despite Everly's diagnosis and some complications she's had to endure, she is the most amazing little girl that you could ask for. She is a thriving, happy, smiling, loving, silly, smart, and active 18 month old. She has a wonderful personality. She is months advanced in her social and verbal skills and already says she is "two". She loves laughing and playing, especially with her 6 year old brother and the rest of her family. She loves looking at books, listening to and playing music, playing in the pool, going for walks, all animals/birds, anything Minnie, coloring, playing with play-doh and so much more.