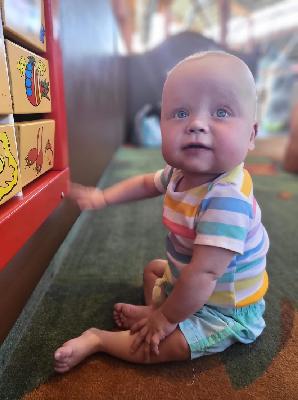 I ride to give hope to Children's Hospital Colorado patients like Kaiden.

Kaiden turns one in just over a week! He had a rough start to life. He was diagnosed with Ebstein’s Anomaly at my 20week scan. I was admitted to Childrens Hospital Colorado at 32 weeks as his condition had gotten worse. I was told that if he was born in the next few weeks, there was absolutely nothing they could do for him. He was born one week later and his surgeon agreed to operate even though he was too small. He spent almost three months in the CICU, 19 days of that time he was on ECMO life support and he was intubated for 7 weeks. He was discharged on Halloween but spent all of November in and out of the hospital. He spent all of December in the hospital and had his second open heart surgery a few days before Christmas. He came home on January 4th and has been home with me and his sister since then. He has weekly appointments and therapies but is growing stronger each day. He just started sitting up two weeks ago and loves being able to sit up and play with his big sis.