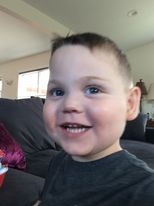 This year I will be riding for Lucas!

This will be my third year riding in The Courage Classic and I'm so excited to be a part of it again this year! It is such an honor to fundraise and ride for the amazing kids I work with in the Cardiac Progressive Care Unit. All of the money I raise will be going to the Heart Institute at Children's Hospital Colorado which helps pay for state of the art equipment and research for our patients. This year my ride will be dedicated to Lucas, an amazing patient I had the pleasure of being one of his nurses. Here's a little about Lucas and his heart journey.

"Lucas was born with hypoplastic left heart syndrome. We found out when I was 20 weeks pregnant. Lucas has Norwood at 5 days old and thrived. He was out of the hospital in 10 days. We ended up going back and forth to the hospital for a couple of months because of feeding intolerance when he got his Gtube. We ended up being back and fourth for three months again after that because of low oxygen. They decided to do his Glenn early hoping that it would help, but it didn’t. We found out that he was silently aspirating because of the Gtube and he had to go back into surgery for a Nissen.

Except for when he got sick we were able to stay home for almost 2 years until 2019. Lucas had a leaky tricuspid valve that needed repaired so we were going to do it in the summer with Fontan, but then Lucas started having headaches and his head swelled up like a cantaloupe. That started our next 6 months in the hospital.

Lucas had a lot of tests and cath labs and the doctors argued about what approach was best for Lucas. Ultimately it was decided to try the valve repair and put in a shunt to see if that helped him.

Lucas had surgery on December 16th 2019 and by December 23rd we found out he had a really bad infection. He spent the next 3 months fighting it before we could go home. By June it became clear the surgery had failed and lucas would need a transplant. In July of 2020 Lucas was transferred to children’s hospital and he was placed on the transplant list.

Lucas was able to wait at home until January of 2021, when we went inpatient. We got called on March 26th that they had found the right heart for Lucas. On March 28th he went in for a 10 hour surgery.

Today Lucas is thriving at home thanks to all the amazing men and women who dedicate their lives to kids like Lucas."