Welcome to My Page! Thanks for visiting and for your support! 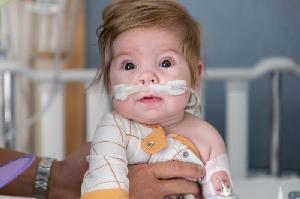 This July 16th and 17th will be my fourth year riding in the Children's Hospital Colorado Courage Classic, and I am thrilled that Will will be joining again this year for his second Courage Classic! This year, we are humbled and excited to be riding over three mountain passes in celebration and honor of two fabulous brothers, Hayes and Hendrix! Will will be riding for Hendrix, the spunky, full of giggles older brother, and I will be riding for Hayes, Arica and Dan's feisty little man whose smile can make you melt from across the room and who is currently battling and fighting for each day. Both of these little guys and their wonderful and fabulous parents, Dan and Arica, have one heck of a story! I have gotten to know Hendrix and Hayes and their parents and hear their story through my time as their nurse at Children's Hospital Colorado on our cardiac progressive care unit. When I started as a heart and pulmonary hypertension nurse at Children's Hospital Colorado, I quickly learned that the Courage Classic was an amazing event and that riding for the Cardiac Climbers in honor and support of our congenital heart and pulmonary hypertension families was an opportunity not to be missed, and this year is no exception!

Please take a moment to read about Hendrix and Hayes and their family's profound, unique, and impactful story below. Their story of two sons with an incredibly rare diagnosis of genetically linked pulmonary hypertension is one worth sharing, as they desperately need more awareness and research to be done in this unique corner of the medical world.

“Hendrix was born full term in 2019. At 24 hours old, he failed his heart screening and went to the NICU for an echo to be completed. They didn’t think much about his pulmonary pressures being so high as this is normal in newborns. Hendrix went home on normal time and spent the first month at home. But each day seemed to be more difficult. He wasn’t gaining weight, started to struggle to breath and just slept. At a month old his primary did a repeat echo and that echo sent him to Children’s Hospital Colorado in hours with a diagnosis of Pulmonary Hypertension. Hendrix spent 28 days in Colorado at Children’s Hospital Colorado tweaking meds, oxygen and feedings. At 9 months old Hendrix returned to Colorado for a repeat right heart catheterization procedure which showed much worse numbers and was the start of triple medications to treat the pulmonary hypertension. Hendrix spent another month in Colorado and in and out of the hospital for dehydration. We completed multiple target genetic sequencing which all seemed normal and finally completed a whole exome sequencing. The whole exome sequencing came back after his brother was born in August of 2021. It showed 3 mutations, two are different variants of the same gene and the other is Cornelia De Lange. Doctors considered these all to be unknown and not to affect Hendrix, until his brother had all the same diagnoses and symptoms as Hendrix. It was at this time discovered that Hendrix and his brother, Hayes, have an incredibly rare mitochondria mutation which results in pulmonary hypertension. There is no name for this mitochondrial mutation as there are only 7 reported cases in the world to have this mutation. Hendrix is now thriving, off oxygen, weaning down on medications and becoming a growing toddler! He still has a road in front of him as pulmonary hypertension is a progressive disease, but he’s doing very well.”

“Hayes was born full term in August of 2021. Given his brother’s history with pulmonary hypertension, his mom asked the heart screening to be done at 12 hours old instead of 24 hours. Hayes was immediately sent to the NICU following this congenital heart screening and was placed on oxygen. Hayes had trouble feeding as well. During our 14 days in the NICU, we worked on tweaking his oxygen and tracking his feeding. Hayes went home with a feeding tube and on oxygen. At 1 month old Hayes started to show struggles of breathing and requirement for more oxygen. He was started on one pulmonary hypertension medication at this time in hopes he had time to get to Children’s Hospital Colorado. Hayes had a right heart catheterization (RHC) completed at 2 months old in Colorado and a CT with Bronchoscope. His RHC showed the most severe numbers that this doctor performing has ever seen in her 25 years as a cardiac catheterization doctor. Hayes spent the next 3 months in Children’s Hospital Colorado’s CICU. At this time, Hayes also had the genetic target sequencing and whole exome sequencing done, resulting in the same mutations present that were on Hendrix’s genes. This was incredibly difficult for the doctors to believe, as they had never seen this before. Upon further evaluation and multiple meetings with genetics, we learned that there was a 1/16 chance for both boys to have this mutation, and they both did. Hayes went home after 86 days of being admitted at Children’s Hospital Colorado with oxygen, a feeding tube and triple medications as well as metabolic supplements. He was home for 2 weeks before being flown back to Children’s Colorado in January of 2022 with COVID, rhinovirus and pneumonia. He fought, he thrived day after day. He had many setbacks from pulmonary hypertension crises, but he was pushing through all of them. After another 140 days at Children’s Hospital Colorado, Hayes was transferred to Children’s Wisconsin to continue long term care closer to home as he continues to fight! He is a very happy 10-month-old boy who brings a smile to everyone that meets him!”

It is an overwhelming privilege to be riding for Hayes in this year’s Courage Classic alongside Will who will be riding for Hendrix. We feel unqualified to be riding with the pictures and stories of Hendrix and Hayes on our backs, as I have never spent a day in the shoes of either of these little guy’s or their family. Biking is not my forte, especially at altitude and over mountains and for a distance I don’t think I have fully comprehended. It will only be Hendrix and Hayes’ stories and the passion to see more children with pulmonary hypertension and congenital hearts healed and lives saved that will be my inspiration to put one pedal in front of the other!