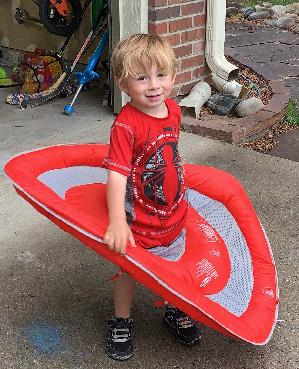 I ride to give hope to all Children's Hospital Colorado patients. But even more than that, I ride for the guy above!

Hawkin was born on March 6th, 2018, 2 weeks prior to his planned c-section. During all of our prenatal care, there were no signs that there was anything wrong with the pregnancy or the baby. We never found out the sex of any of our babies, so when he was delivered, the first surprise was that he was a baby boy. The second surprise, which shocked us all, was that he wasn’t getting the oxygen he needed. The staff at Lutheran Hospital worked at a feverish pace and did what they could to help him, but ultimately he was airlifted to Children’s Hospital for a full diagnosis. The Children’s NICU team was there ready and waiting for him. It didn’t take long for them to figure out that he was born with a condition known as Transposition of the Great Arteries (TGA) with an intact atrial septum. This condition could have killed him because the oxygenated blood from his lungs wasn’t being circulated throughout his body and brain. Fortunately, we have the Cardiac Unit here in Colorado and he was immediately taken downstairs to the Cath lab for an atrial septostomy which allows the oxygenated blood to mix with the deoxygenated blood raising the level of oxygen to a sustainable level. This was really where we began to see how much of a fighter Hawkin was and that was important knowing what lied ahead for him. One week later, on March 13th, he was prepped and rolled back for open heart surgery where the surgical team did the “switch” procedure to give him a “normal” circulatory system. The surgery went well and we were finally able to move on to the recovery period. He remained in the hospital for another three weeks as he recovered and simultaneously tried to put on weight. Eating was a challenge initially as he was always so tired, but eventually he had his strength back and after 30 days in Children’s, he was released to go home.

We’re happy to report that now at 4 years old, he’s doing awesome and all signs are showing that he’ll go on to live a normal, active life with no long term effects from his congenital heart defect. None of this would be possible without the amazing teams at both Lutheran and Children’s Hospital. So many people had a hand in helping Hawkin and keeping us informed and optimistic throughout this whole process. We can’t thank everyone enough!

Unfortunately, Hawkin will not be the last child to face a life-threatening illness and our family will not be the last to navigate a frightening diagnosis.  The Courage Classic is not only a personal challenge, but also an opportunity to support positive outcomes and healthier futures for these children. Please donate if you can or even better, come out and join us for the ride!