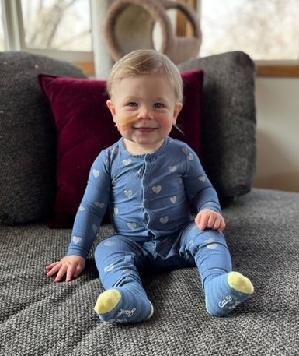 This will be my 5th year riding with the Cardiac Climbers in the Courage Classic bike tour!! On July 16th & 17th, I will be riding 80+ miles through the mountains of beautiful Colorado to help raise money for the Heart Institute at Children’s Hospital Colorado! As a nurse in the Cardiac Progressive Care Unit (CPCU), I have the privilege of caring for babies, children and even some adults with congenital heart defects who have had open-heart surgery or other heart interventions. Depending on the severity of the defect, some only require one surgery, others will need multiple surgeries, and some will need a heart transplant. The Heart Institute is ranked #6 in the nation and it is an honor to be a part of such a special place where miracles happen!!

Every year, each member of our team dedicates their ride to a special patient of the Heart Institute. This year, I have the pleasure of dedicating my ride to a sweet baby boy who touched our hearts during his stay with us....Lewis Howard!!

Lewis was a happy, healthy baby boy until September 7, 2021, just after he turned 6 months old. His parents Haley and Sam were concerned with how fast he was breathing, so brought him to the ER in Minnesota where they lived. There, they received the shocking news that their son had Dilated Cardiomyopathy, a condition where the pumping chambers (ventricles) of the heart are abnormally enlarged and weakened...and that Lewis was now in heart failure. Lewis' was started on oral heart failure medications and was doing well for 2 months until he had a sudden decline. His parents were told he needed a heart transplant. At that time, the University of Minnesota did not have a pediatric heart transplant surgeon so Haley and Sam called hospitals all over the country trying to find a solution. While they waited, Lewis was getting worse and they were running out of time to safely transport him to a different hospital. However there was hope when they received a call from Children’s Hospital Colorado, the first transplant center to call them back! Children's Hospital agreed to take Lewis as a patient and he was emergently flown to Colorado on November 10th! Despite being immediately started on IV medications to help his heart pump better, his heart function was not improving. Just two days later on November 12th, Lewis went to the OR where he was placed on a VAD (Ventricle Assisted Device) called the Berlin Heart. The Berlin Heart would pump blood for his heart while he waited for a transplant. His family relocated to Colorado to be with Lewis while they waited, day after day praying nothing went wrong. On February 18, 2022, 95 days later, Lewis received his new heart, just 2 weeks before his 1st birthday!! He had another scare right after his transplant, and had to be placed on ECMO (a life support machine), but Lewis fought hard and recovered! Lewis was discharged from the hospital on his 1st birthday!! Since his heart transplant, he has been thriving....he is happy, crawling everywhere and trying to wrestle with his 3rd year old brother Jude:)

Lewis’ story is so touching and all the nurses quickly fell in love with him and his wonderful family! Because of the care and technology available at Children’s Hospital Colorado, Lewis got a second chance to live a happy life with a new, stronger heart!

Please consider making a small donation to help me raise money to help support children like Lewis!! ALL money raised goes directly to the Heart Institute for state of the art equipment, research, education, and family assistance. My goal is to raise $1,500! Thank you so much for your support!!