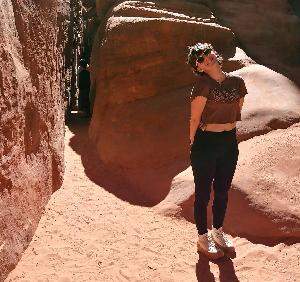 Please read on for my daughter's story.  First I want to let you know that the donation page makes it look like the minimum donation is $150 but it is not.  In the box that says "other", you can type in any amount you want to give.  The minimum allowed is $5 not $150!  Any amount is SO appreciated!

My daughter Amanda was diagnosed with osteosarcoma September 2020 at the age of 16. She had chemotherapy starting that September through May of 2021. During her treatment, she had 2 surgeries, the first was to remove the tumor from her tibia which involved an extended knee replacement where the upper part of her tibia and the lower part of her femur were replaced with titanium. She is still getting used to her mechanical knee which will never allow her to run or jump like other kids. She had a second surgery to remove nodules from her lungs because there was concern they were metastasized osteosarcoma. Thankfully, they were not cancerous but had to be removed "just in case" because osteosarcoma is a very aggressive cancer that often metastasizes to the lungs.

The chemotherapy that has been shown to work best for osteosarcoma can damage hearing and heart function. There are kids who get hearing aids after osteosarcoma treatment and/or end up with cardiomyopathy. The same treatment that was used in the 70s is still being used today!

Research for osteosarcoma treatments is terribly underfunded as is the case with most types of pediatric cancer. There are so many who go through this treatment and fight so hard only to ultimately and heartbreakingly be defeated by the cancer.

We are so very lucky that Amanda was able to be treated at Children's Hospital of Colorado. We have had such an incredible amount of faith in her oncologist and orthopedic surgeon. They not only have treated Amanda like family but are some of the best at what they do. Families travel from many miles around for their kids to be treated at Children's Colorado but we are so lucky that for us, it's less than a 20 minute drive.

Besides being the best place for miles around for kids to receive treatment, Children's is involved in research and always trying to improve the types of treatment available for these kids.

Every penny raised by my Courage Classic team Wheels of Justice goes to the oncology department at Children's. Every year, the funds support research for a different type of cancer. This year, the funds are being directed to research for diffuse intrinsic pontine glioma or DIPG, an aggressive and incurable cancer that is underfunded and under researched (like most types of pediatric cancer).

Cooper Deming died from DIPG at the age of 12...within a year of diagnosis. This year we ride to honor Cooper and all the kids and families affected by pediatric cancer, and to raise money that will fund research for DIPG, one of many aggressive and currently incurable forms of cancer, so that others may have a brighter future.

Please give what you can.  Thank you from the bottom of my heart!